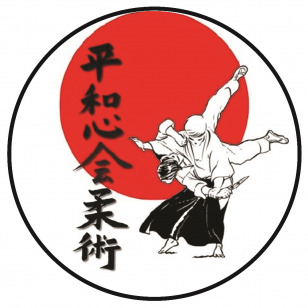 EVERYONE IS INVITED TO COME VIEW OR JOIN IN OUR TRADITIONAL JAPANESE JUJUTSU CLASSES! 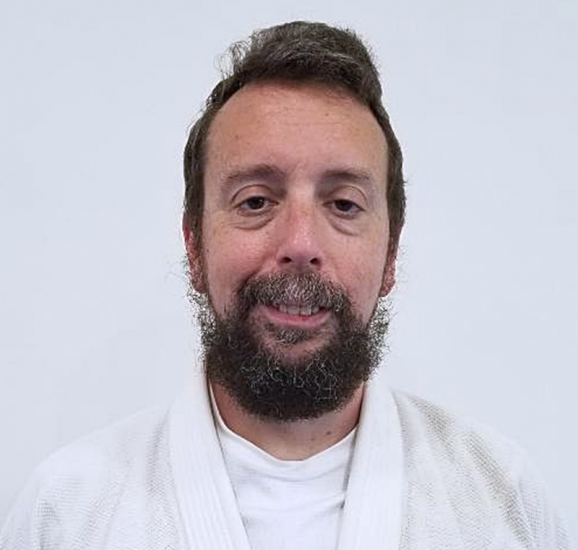 David Wilson began his study of Traditional Japanese Jujutsu in 1999 under Sensei Archie Foster in Laurel, MS, after a nearly fatal service-connected motorcycle accident in 1992 left him without a functioning left leg and in severe chronic pain. He studied there for one year before moving to Baton Rouge, LA, when his wife graduated college.

In 2002, David began training with Sensei Robert Carver in Baton Rouge at the Heiwashinka dojo. His knee had deteriorated to the point where he could only train for two out of the three days of class per week or he would be unable to leave his bed due to pain and weakness, so he made the decision at the young age of 33 to have his knee totally replaced after six months of jujutsu training.

The new knee, combined with thrice-weekly jujutsu sessions, weight training, and a regimen of low-carb Paleo eating and lifestyle changes, allowed David to lose 80 lbs and become physically fit once more. He continued to study with Sensei Carver, earning his Shodan in 2006 and his Nidan in 2008. In 2013, his wife was offered a job in her hometown of Gautier, Mississippi, so David and his family moved just north of there to Vancleave. In recognition of his dedication and ability, Sensei Carver promoted him to Sandan in 2014.

In 2017, David Wilson was awarded his Yondan and Senior Instructor certificate from Sensei Carver and the USJJF (United States Ju-jutsu Federation).

Sensei Carver had eschewed the commercial dojo model, preferring to teach out of YMCAs to keep costs minimal and David continued that philosophy when he moved to South Mississippi and soon began teaching out of other dojos, gyms, and vacant spaces, which allowed him to teach for donations rather than mandatory fees. This was not without its share of problems, since it clashed with the owners of the space and their desire for remuneration. Thus, in 2019, David found himself and his students training in his three-car garage with no air conditioning. Three times a week, he would pull out the cars, sweep off the floor, pull out the mats, teach class, and then reverse the process two hours later.

With encouragement from his wife, David decided to build himself a dojo on his property in Vancleave, MS. During the process, it was suggested to him by their local county supervisor that he should pursue the formation of a 501(c)3 nonprofit organization which would help their goal of instructing other disabled veterans, special needs kids and adults, and law enforcement officers in the martial arts form of Traditional Japanese Jujutsu by utilizing his present donations model, rather than charging class or lesson fees. David did so and Heiwashinkai Jujutsu, Inc., received their IRS determination letter in December of 2019 as a full-fledged charitable nonprofit organization.

Three years later, the dojo/multipurpose building is now complete. David began teaching out of it in January 2020, just in time for the COVID-19 pandemic to shut down all martial arts schools in the United States. As a result, their dojo doors were temporarily closed in March 2020. However, the building construction itself continued and the dojo/multipurpose facility reopened in June of 2020, observing sensible sanitary procedures such as UV disinfectant lighting, hand sanitizers, routine mat cleaning, and screening of students at the door.

David is currently working with the VA Hospital in Biloxi to develop a distance learning program for their disabled veterans to learn jujutsu on-site while they wait for COVID restrictions to be lifted, after which they will begin bussing PTSD and other disabled veterans to his dojo/multipurpose facility for free weekly classes to assist them with their various rehabilitation needs.

His nonprofit organization, Heiwashinkai Jujutsu, Inc., remains largely unfunded due to COVID’s effect on philanthropy, which is why David continues to pay all required expenses out of his own disability income. All donations of volunteer time and funds are gratefully appreciated!